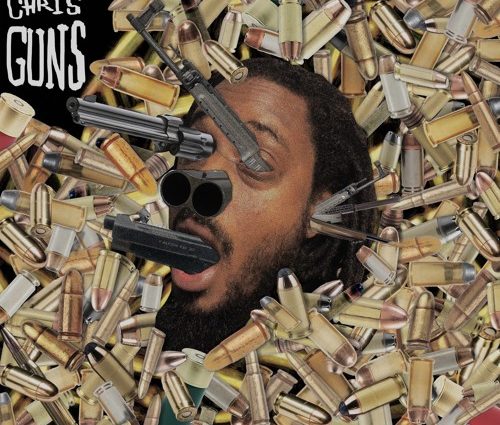 Some singles from that new Quelle Chris album ‘Guns’ set to drop at the end of the month. Via Mello Music Group. Lets go!

From the album “Guns” by Quelle Chris smarturl.it/GunsGunsGuns

Quelle Chris joins Cavalier, Bilal Salaam, Grammy Nominated pianist Eldar Djangirov, and comedian James Acaster for the beautiful skyward looking new single “Straight Shot.” The song is the second single from Quelle’s upcoming album Guns (3/29) and offers a swirling dreamscape, a 6 minute vision of better things to come. When Frito Lay has been gourmet for so long and you continue to make and live with nothing but love, because while the bullshit is evident, so to is the glory of all your life’s perfection. Melancholy, down-tempo, reflective, and pregnant with the light of promise, Quelle’s new track Straight Shot plays like a choir being lifted by unseen angels.

“Guns is an arsenal of both sounds, styles and subjects. At its core it’s about things that can be weaponized for good or evil, including ourselves. The words we say, what we fear, how we love, how we live, what we ingest, what we believe in, who we idolize, shit like that. Somewhat a sonic study of the question “do ‘guns’ kill people or do people kill people?” I never start an album the same way but one constant is I try to forget about everything I made before and do something different. Because I’m a fan too and I like hearing new things. I’d say we accomplished that with Guns. My goal with this and all albums is to create pieces people can enjoy, start to finish, for decades to come.” – Quelle Chris

One year after releasing the cult sensation, “Everything’s Fine,” Quelle Chris is back with a new solo album featuring artists like Jean Grae, Bilal Salaam, Denmark Vessey and many more. Known for his boundlessly creative style that has inspired artists like Earl Sweatshirt & Danny Brown, Quelle is a true innovator and artist. The New York via Detroit artist has become recognized for his unique voice, having earned top marks from The New York Times, Pitchfork, NPR, Bandcamp and many, many more. The newest album from the talented artist is out everywhere on March 29, 2019 on Mello Music Group.