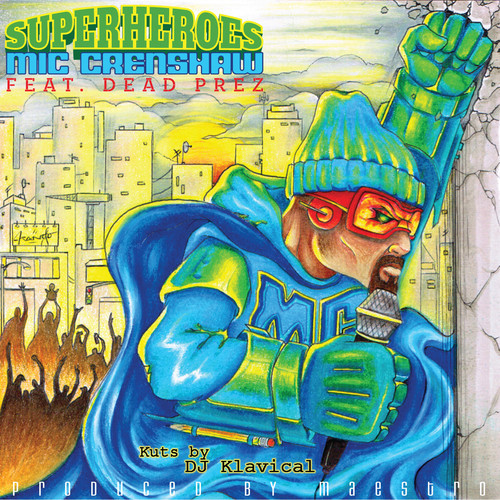 “In total, Mic Crenshaw’s music is not only a collective of juicy jams and skillful rhymes. This guy has made his mark on culture. Now it’s time that he garners critical mass to spread his positivity to the world at large.” – Billboard

“Superheroes” is a collaborative effort between Mic Crenshaw and Dead Prez, with production by Maestro of Detroit’s D-12. The track speaks to the true everyday “Superheroes” that support their families, guiding them to help tackle the future problems facing the planet.

Mic Crenshaw, born in South Chicago, is one of the definitive Hip Hop Artists to grace the Northwest. Crenshaw spent his formative years battling the emergence of white supremacist gangs in the streets of Minneapolis. Now as a musician, he uses his music, time, and resources to help inspire others to take positive paths in their lives.

Crenshaw’s non-profit; Global Fam has help to setup and support a computer center in Burundi, central Africa. Over the past six-years, the center has educated over 450 locals wth computer skills. Burundi shares a history and border with Rwanda, and is one of the fifth poorest countries in the world. The center is now striving, and is expanding both in size and services.

In 2009, Mic released his debut solo CD, “Thinking Out Loud”, which spent 10 weeks in the top 10 on College Music Journal’s (CMJ) National Radio Hip Hop Charts, peaking at number 4. Crenshaw’s second-solo release, ‘Under The Sun,’ was released in the winter of 2010. The projects lead-single, “Yeah,” peaked at #2 on CMJ’s Hip Hop Charts.

Mic Crenshaw is currently recording music for his third solo-LP and “Superheroes” f/ Dead Prez will serve as the projects lead-single and he is also working on an upcoming Rock/Rap EP entitled “Bionic Metal” which will be released this summer.