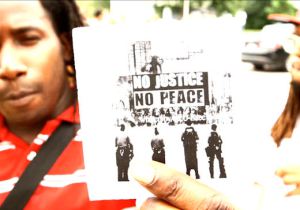 In recognition of National Police Brutality Day (October 22), Talib Kweli and 9th Wonder delivered a new visual for the track “Which Side Are You On,” taken from their joint LP, Indie 500. The video’s a collection of footage captured by director Sama’an Ash that utilizes clips his August trip to Ferguson to commemorate the murder of Mike Brown along with other newsreel of scenes from police incidents and protests around the country. The song itself – available to stream here – is a call to arms, encouraging people to stand up to and speak out against police brutality. The Nottz-produced track includes Tef Poe, a constant figure from ground zero, and Kendra Ross assisting on the chorus, which likely sounds familiar to some. But, it’s really Talib who comes through with a spirited verse where he’s spitting as if his life depended on it.

“We drawing a line in the sand
You with us or against us? Gotta decide where you stand
There’s an angel and a demon inside of every man
It’s completely up to you, who getting the upper hand?”

Pick up Talib and 9th’s Indie 500 right here, available for pre-order now until the November 6 release.