Kairo is an up & coming artist residing in Miami, FL since birth who has opened up for the likes of Afrika Bambaataa, Action Bronson, Freeway, etc from Miami all the way up to Spanish Harlem, NY & has collaborated with artist such as Ryshon Jones, Sean Buck, Shay J, etc. 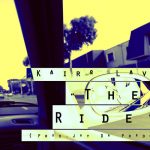 Let us know what you think of the Music Video & Track by tagging Kairo with your feedback on the following social networks :