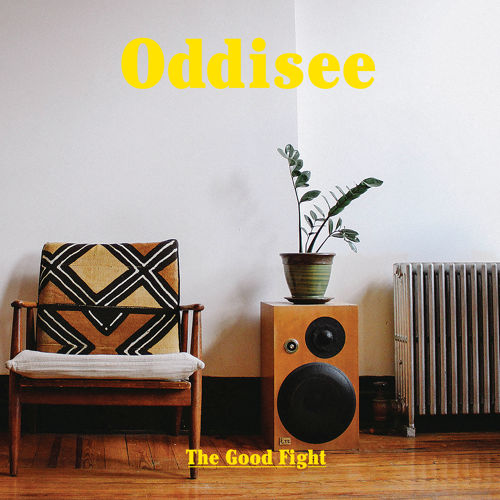 In a landscape overrun with abstract indulgence and shallow trend-chasers, the Prince George’s County, Maryland artist Oddisee has created ‘The Good Fight’, a record that reminds you that it’s music before it’s hip-hop. Due May 5th on Mello Music Group, it’s for the fans and for himself. It finds the musical heavyweight balancing between craft, career, and successfully growing into the world around him. Stream the first single, “That’s Love”.

Album Description:
Oddisee makes music that rattles in your bone marrow. It’s imbued with love, honesty, and selflessness. It’s virtuosic in its musicality, direct in its language, and infinitely relatable.

In a landscape overrun with abstract indulgence and shallowtrend-chasers, the Prince George’s County, Maryland artist has created “The Good Fight,” a record that reminds you that it’s music before it’s hip-hop. Released on Mello Music Group, it’s for the fans and for himself. It finds the musical heavyweight balancing between craft, career, and successfully growing into the world around him.

For Oddisee, “The Good Fight” is about living fully as a musician without succumbing to the traps of hedonism, avarice, and materialism. It’s about not selling out and shilling for a paycheck, while still being aware that this is a business requiring compromise and collaboration.

It’s music that yields an intangible feeling: the sacral sound of an organ whine, brass horns, or a cymbal crash. It’s not necessarily the syllables, but rather what they evoke. A song like “That’s Love” is more than a declaration; it’s a meditation on our capacity to love and the bonds binding us together. Ambition and greed war with our sense of propriety. “Contradiction’s Maze” offers a list of paradoxes we all face (“I want to tell the truth when it hurts/but when it comes to me, I want the blow softened.”)

Oddisee’s production simmers in its own orchestral gumbo. You sense he’s really a jazzman in different form, inhabiting the spirit of Roy Ayers and other past greats. The Fader’s compared him to a musical MC Escher, calling hailing his “grandiose and symphonic sound” and “relevant relatable messages.” Pitchfork praised his “eclectic soulful boom-bap.”

“The Good Fight” acknowledges the stacked odds, but refuses to submit.

It’s both universal and personal. The child of a Sudanese immigrant highlights the rigors of his own upbringing: his pregnant mother working the register until she was about to burst, his pops’ shuttered diner that couldn’t survive Reaganomics—the one that Oddisee drives past every time he returns home, just to remind him how quickly the world can turn bad.

It’s these minor details that add into something major. It’s testament to the indelible nature of art: when you can turn what you love into something that lasts.